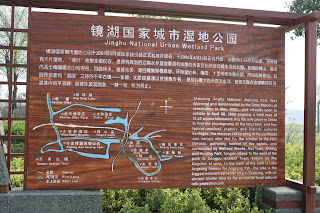 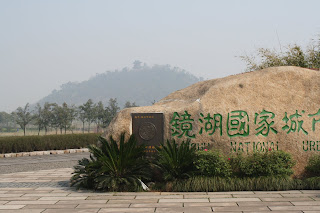 The day after we went to Houshan I went on a trip with the school - to Jinhu Lakes.  I was to learn that his area has been undergoing some transformation because "they are moving the city to this place."  Now this might seem a little challenging, but there is a habit of doing this sort of thing in China.  However, I think what is meant is that gradually they will be moving some major city enterprises or offices to this area, which clearly used to be old villages, but now raised.  Clearly there is rubble in many places, but it is also a very picturesque area surrounded by lakes and canals.  I'd not been there before, and clearly did not know it existed, and no one could explain to me what "was" there.
I have learned that I ask too many questions.  I'm curious, interested, and like some explanations for what I see before me, but in China, their culture has "taught" them that asking questions can get you into trouble.  I might be a spy, or if I was Chinese I might be someone reporting on what I say.  It is why no one will give you any explanation to what seems to be a simple question. If it is none of one's business why does anyone need to know.
When we arrived there were few people around and one could hear traditional music being played as if some lone musician was playing in one of the pavilions in the garden.  Later I found the speakers hidden in the bushes, and deduced that it was recorded music. A nice touch - and not intrusive and certainly adds to the theatre of the tourist spots. 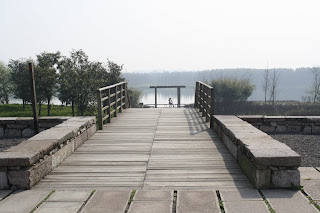 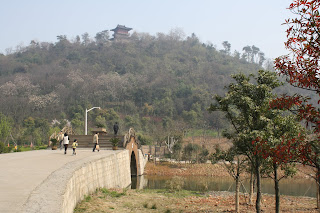 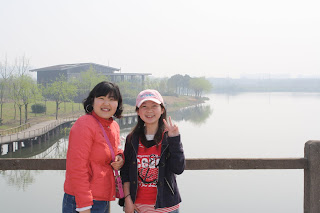 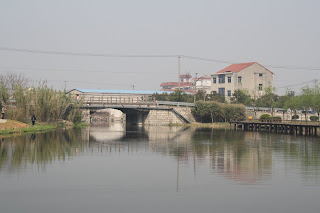 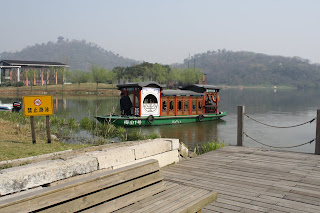 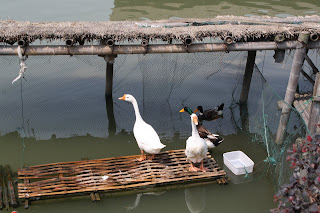 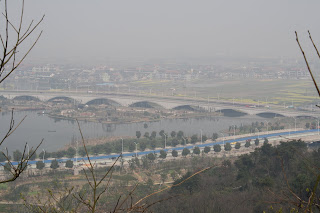 After our walk around the lake and up to the top of the hill, we were driven to another area which is famous too.  It was a sort of fishing village where there were many pens for the fish, and a long bridge that connected two areas.  I did go on the bridge a little but it was a stone bridge with nothing to hold onto - no rails, so after a few steps and a feeling that a fall might occur I retreated and had to satisfy myself just with photographs.

We had a lovely lunch at this area and plenty of time to explore the gardens and the surrounding area before the trip back to campus.  It was a little weird - I was the only English speaking foreign teacher to attend, so left to my own devices quite a bit.
However, I did spend time with the Vice Proncipal,  (NOT MY spelling error - that is what it says out the front of his office!!!) whose English was very good actually.  He was very good to me.

Links to other Blogs

Links to Di's other Blogs

Other links of interest